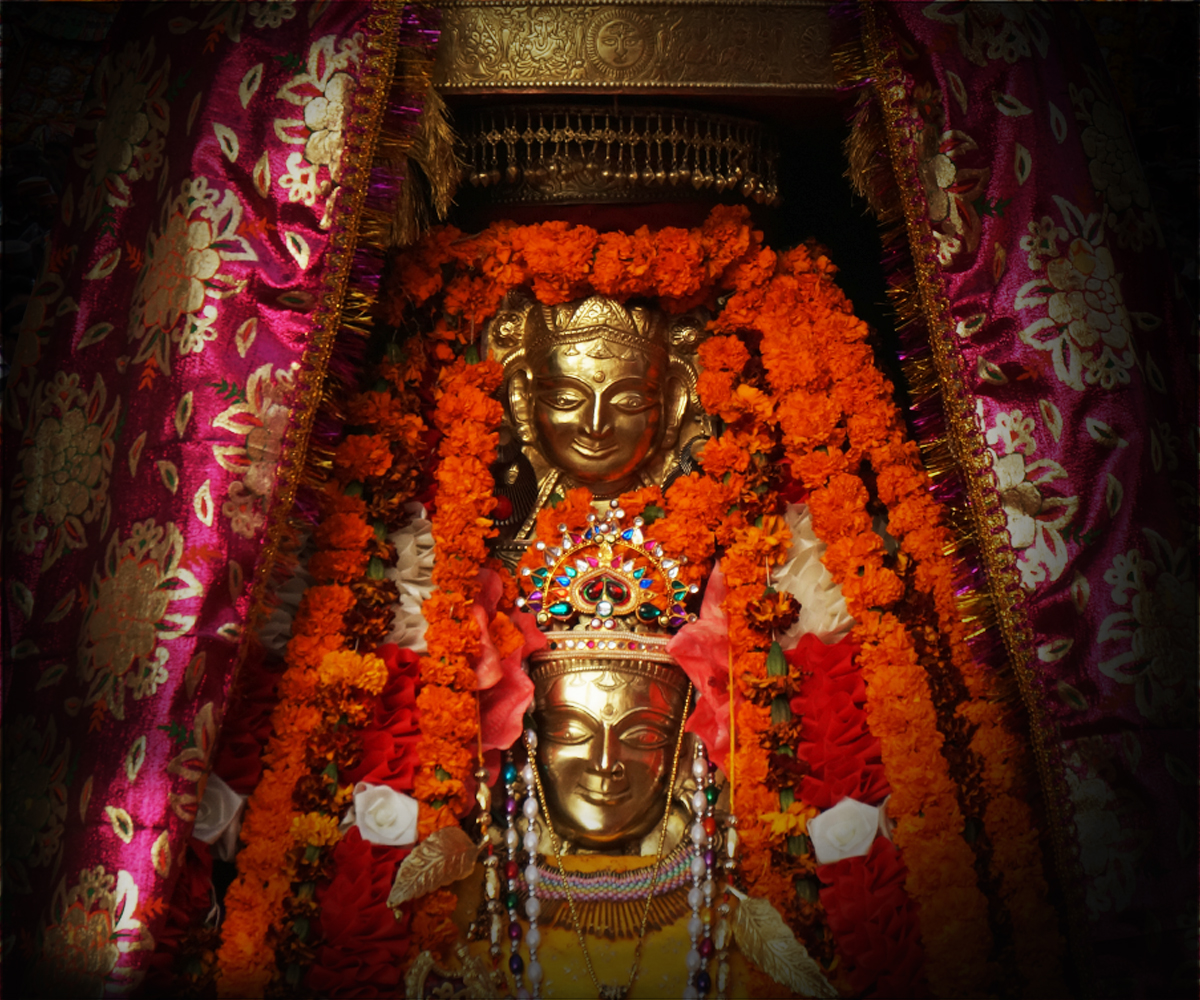 Origin of the Goddess & of Kaulantak Peeth

In the beginning, before the universe existed as it is known today, the Supreme Consciousness (ब्रह्म) alone existed. Through self-resolve (एकोऽहंबहुस्याम), the Supreme Consciousness divided into all. During the creation, the first ‘Kula’ or the knowledge system manifested, which is known as the ‘Uttpatti Kula’ (the tradition of creation). Something that is created needs maintenance. The need for preserving what was created originated, thereby forming the ‘Stithi Kula’ (tradition of Perseverance). And something that is created will be transformed and ultimately is destroyed. From this came the ‘Sanhar Kula’, the ‘Tradition of Destruction’.

Yogamaya is the Supreme Divine Shakti who runs these three traditions of knowledge in her invisible form. In this invisible form, Yogamaya is known as Kulaa Devi. In her invisible form, She didn’t have a physical body and conducted the affairs of the three traditions of knowledge through Her three respective forms of Sukulla (Utpatti Kula), Kurukulla (Stithi Kula) and Vikulla (Samhara Kula). Kulaa Devi even though was in manifested form but had no physical form. After Bhagwan Shiva married Ma Parvati, Agama tradition came forth by the conversation about the great knowledge between Ma Parvati and Bhagwan Shiva.

Subsequently, in the realm of Devas (enlightened divine beings) Kaulantak Peeth was established. For this, from the yoga body of Parvati Mai ji, Goddess Kurukulla manifested. Ma Parvati divided Herself into three forms, basically representing the three modes of nature, the Satwa, Rajas and Tamas. TheSsatwa mode transformed to Sukulla form, Rajas mode to Kurukulla and Tamas form to Vikulla. The three Goddesses further divided themselves into thousands of Yoginis and Lord Shiva divided Himself to thousands of Bhairavas and ultimately leading to many lineages. The Yoginis and Bhairavas from different parts of the world also migrated to the Himalaya. The list of the Bhairavas and Yoginis came under one of the following broader categories:.

–Vayumukhis (The Gods traveling in the speed of wind)

– Vrikshasthitas (The Gods residing in the trees)

–Nirjharstithas (The Gods residing at the waterfalls, fountains etc)

–Falasthitas (The Gods residing in the fruits)

–Kamandalusthitas (The Gods residing in the stoup)

–Dandasthitas (The Gods residing in the sticks and logs)

–Pushpasthitas (The Gods residing inside the flowers)

–Dhatusthitas (The Gods residing in the metal elements)

–Bhusthitas (The Gods residing in the land and in the soil)

–Bahurupi (The Gods who could change forms)

–Samyukta (Many Gods attached to the same body)

–Guptagana (The Gods who remain hidden)

–Ratnasthitas (Gods residing in the jewels)

–Sagarsthitas (Gods residing in the oceans and seas)

In the Deva Parampara of Himachal Pradesh, the ‘Malimukhas’ and the ‘Ratha’ of the Devi- Devata are the faces and representations of that particular energy. She is the only Goddess in the entire Deva Parampara who has three ‘Malimukhas’. The Malimukhas of: 1. Devi Sukulla 2. Devi Kurukulla 3. Devi Vikulla.

Mahasiddha AvalambaVinda, the Siddha of the atheistic tradition of ‘Siddha Dharma’, realised that Kurukulla is the potential to experience. Going by the three forms of the Devi: Sukulla, Kurukulla and Vikulla, an experience that is full of suffering is Vikulla and the one full of joy and happiness is Sukulla. Living life by flowing in the middle of these two is Kurukulla. Kurukulla Vidya is to keep all sensations and experiences in an orderly fashion. It is to be used for discerning things and in experiments to discover truth. It is quite intricate to separate experiences from fallacy. Subjectively, false sensations might appear true. Therefore, the truth seems to be mysterious. This is the reason Kurukulla is deemed a mysterious Goddess.

As per the Himalayan Siddha Tradition, the Kula Devi- Kurukulla, created five major virtues for the world and sentient beings to cultivate in their life for the betterment of everybody. The rationale behind the virtues was also for the destruction of worldly impurities and impure/demonic worldly people. The five cultivable virtues of Kurukulla are:

She prescribed the cultivable trait of ‘harmony’ so that different people with different ideologies would coexist together. Therefore, so many different kinds of ‘Chetanas’ belonging to the Devata, Naagas, Gandharvas, Asura and so on could co-exist in the Goddess Kurukulla’s ‘Kulluta Mandala’ (the region of present Kullu).

The Goddess deemed ‘Peace’ as an important virtue for the sentient beings. When people were constantly fighting for the supremacy of their ideology and philosophies in ‘Kulluta Mandala’, it resulted in constant quarrels. Chaos was everywhere. To stop this, Ma Kurukulla introduced harmony along with peace for the betterment of everybody.

This is the reason why Kulluta Mandala didn’t differentiate between Devas and Danavas.

Duty is the non-negotiable virtue in the tradition of Himalayan Siddhas. Earlier, when everyone claimed rights and abstained from not performing their prescribed duties, The Goddess then prescribed ‘duty’ over rights. The people would then have to fulfill their duty to maintain the other two virtues mentioned before. This led to the achievement of peace, harmony among all.

She further explained that aesthetic virtues and skills would provide hands and legs to the disabled, strength to the weak, confidence and capabilities to the inferiors and wisdom to the idiots.

Ma Kurukulla after having prescribed the four other virtues then blessed the planet with ‘Bravery’ as the last virtue for cultivation to defend the other four virtues. The unwanted tamasic people were few in numbers yet they troubled the majority of people. The tamasic people who would trouble the decent people were asked to be dealt with by the virtue of bravery.

Kula Devi’s main temple is in Jogini Dhar, Kotla village, Himachal Pradesh. The Kula Devi temple is the epitome, the ultimate symbol of the Siddha Dharm in the gross world, for the Himalayan Siddhas. This temple of Goddess Kurukulla is different from the other Hindu temples around the world.

Kurukulla temple is private to His Holiness, Mahasiddha Ishaputra at present. Also called the ‘Peeth Mandir’, the Devi’s temple is the private temple, a strictly personal legacy passed on from the previous Kaulantak Nath to the next one for thousands of years. The temple is considered as the center from where the educational system of the Himalayan Siddha Tradition flows forward.

All worship rituals, Karmakand, and Deeksha happens in front of the Kula Devi’s Mukha (idol or the image). Further, every kind of Sadhna, Aradhna and mantra chanting of Devi Kurukulla is done only in two languages known as the Tankari and Bhoot Lipi. So if one harbors any hope or desire in their heart to know and to understand about the secret tradition of Kaulantak Peeth, they first should try to know about the Goddess Kurukulla and Her tradition. If you understand the tradition of Kula Devi, then you will begin to understand the hidden tradition of Kaulantak Peeth.

If you are curious about the unique ancient tradition around the Supreme Goddess of the Himalayan Siddha Tradition, Goddess Kurukulla, you can find the authentic source for the knowledge on the Kula Mayi website.

To know in detail about the Kurukulla Temple, you can visit the website of www.GoddessKurukulla.com